One day in Kanyakumari 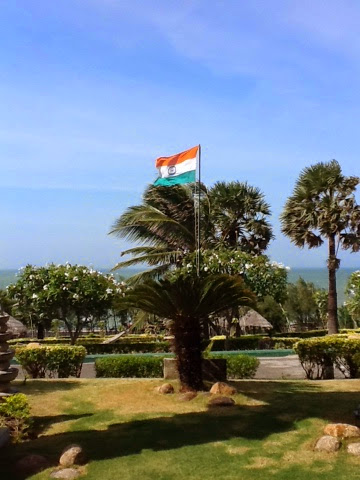 68th Independence Day of India we spent in Kanyakumari, Cape Comorin, the extreme southern tip of India, where they join the Indian Ocean, the Sea of ​​Bengal and the Arabian Sea.
The place is very beautiful and evocative, the sun was beating fast, but it was fine because it blew a great wind.
The morning at the hotel started with a small ceremony to celebrate the Independence Day of India from British Raja. All the staff were deployed to tribute to the Indian flag. 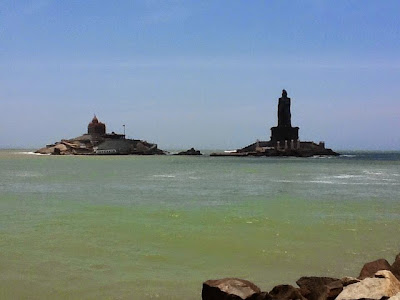 A Kanyakumari there are two or three things to see. First strikes the eye the huge statue built on a rock near the shore representative of the Tamil poet Thiruvalluvar. The statue is high 133 feet (40 meters) as many as the chapters of Thirukural, the main work of the poet.
Next to the rock of Thiruvalluvar, stands the Vivekananda Memorial, a building where the disciple of Ramakrishna meditated in 1892.
The Memorial is reachable by ferry.
Few things are collected in the Gandhi Memorial building where Gandhi's ashes were placed in the long journey that they did in the whole of India before being scattered as the will of the Mahatma.
Interesting Kumari Amman Temple, the temple dedicated to Kanya (which means virgin) Kumari that give name of the location.
Very advisable to get away from these tourist spots and walk along the main road. After a while you will find the 'real India': a temple not marked on the tourist if books, but very nice and a few shops with items for every day not to be missed.
Tonight a big party for Independence!