What is beyond and yet has no name 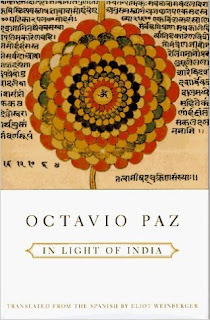 In a stand of used books I found the enlightening book "In light of India" written by the Mexican poet and Nobel Prize for Literature, Octavio Paz, who has long been in India as his country's ambassador, and he knew very well and he loved India.
I like to bring a thought that I liked a lot.
Paz remembers his first impression of India took place in Bombay in 1951.
The noisy reality of India dazes him and at the and of that day day he try to summarize what he had "seen, heard, smelled and heard: dizziness, horror, wonder, joy, enthusiasm, nausea, invincible attraction. What is it that attracted me? It was difficult to answer: human kind cannot bear much reality. it 's true, the excess of reality becomes unreal, but this unreality for me was transformed into a sort of unexpected balcony from which I looked out, on what? On what is beyond and yet has no name."