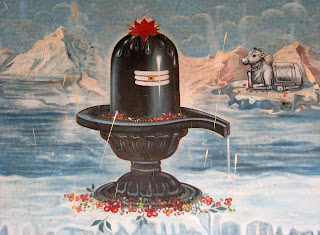 Shiva is the only Hindu deity who is revered as a non-iconic, non-anthropomorphic.
I refer to the lingam (or linga) and in its isolated form as it is combined with the yoni that you can see in this post and the following one.
Obviously there are several anthropomorphic images of Siva and of course the Mahadeva is also revered in his image 'explicit', the fact remains that he is the only Hindu god whose image is very often replaced by an abstract symbol, the lingam, also called just Shivalingam. And that is the lingam is placed and worshiped in Garbhagrha, the most sacred place of the Hindu temples, the place where is stored the image of the god is worshiped mainly in that temple, the sanctum sanctorum in fact.
The worship of the lingam, the main worship for the Lingayat sect of Shaivism, is very old as it is already present in the prevedic period.
This is a totally indigenous cultic element that - after an initial attempt to oust by the Vedism and Brahmanism - came in its own right to be part of Hinduism. Consider that in the Rig Veda despises those who worship the lingam.
As said the lingam can be alone or combined with the yoni. 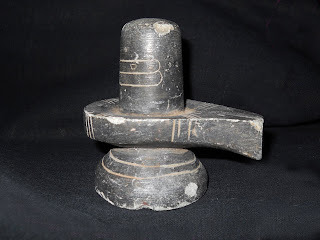 Lingam in Sanskrit means 'sign ', 'track', mark and even 'phallus'. While yoni means origin, source, womb and indicates the female genitalia.
The lingam is a column, pillar, usually of stone, but can be any other material, in many texts it is described as a pillar of fire. It is built according absolutely predetermined shapes and sizes.
Its base is square and oriented in the four directions and usually is not visible being buried. The second part is octagonal and supported on the yoni.
The three parts of the lingam to be proportional to size based on many parameters including the caste of those who venerate it.
Typically, the surface of the lingam is smooth, but there are also lingam on which are carved images of God or one or more faces of Shiva. In the latter case we speak of Mukhalingam.
When the faces are five - as in the case of the lingam published in this post – the name is Panchamukhalinga. Five is a number of Shiva, as the syllables of his mantra Namah Shivaya.
The lingam is the symbol of Purusha, the cosmic man, the informal, the unchanging, all unspoken. Instead the symbol of the energy  of nature, prakriti, of all that is in the world is the yoni.
One is the immanent cause and the other the efficient cause.
The lingam is in the yoni, it is the power that manifests the unmanifested, is the womb where the lingam deposits its seed to generate all that exists in the universe.