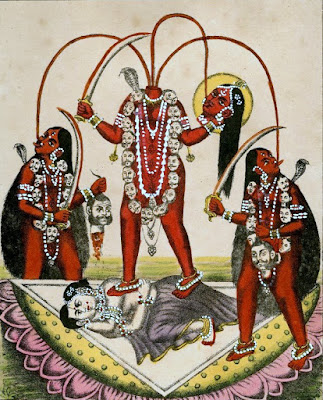 Goddess Parvati was bathing in the cool waters of the river Mandakini, when her two attendends Dakini and Varnini, also known as Jaya and Vijaya, told her that they were hungry and wanted to eat.
The Goddess asked them to wait, but they  insisted the same lot.
Parvati then with the nail of his thumb (or with a sword) cut cleanly through her own head and it fell on her hand.
Severed neck began to flow three spurts of blood that fell directly into the mouth of Dakini and Varnini, while the third went to the mouth of Parvati same.
Was born Chinnamasta or Chinnamundi, the "goddess headless" (in Sanskrit 'chinna' means 'separate' and 'masta' means 'head').
Chinnamasta is one of the ten Mahavidyas I mentioned in this post.
The iconography (see photo) generally rapresents her as a woman holding her head on a hand and neck severed three springs gush of blood that are consumed by the two maids and her own head.
The  Goddess is represented above a man and a woman in the sexual act, they are the God of love, Kama, and his wife Rati, the Goddess of sexual desire.
The neck of the goddess is adorned with skulls and human heads.
The meaning of this deity is controversial.
For more traditional Hinduism, the goddess refers to Vedic sacrifice after which the sacrificial victim was decapitated and to the idea according to which life is born from death in a circular path powered.
The separation of the head from the body and overpower the two deities of desire, also  symbolize detachment from material things, the phenomenal reality and, above all, the ability to control sexual desire, emblematic symbol of all that hinders the attainment of liberation.
In Tantrism instead the meaning of the Goddess is different.
The blood gushing represent the kundalini, the energy that resides in the last chakra of our body and that goes back to the head. In tantric ritual it is in fact central consumption of body fluids. Energy is awakened from its wish-fulfillment represented by the sexual Kama and Rati that then they would not be submissive position, but would be the basis of energy Chinnamasta.