May is approaching and with it the national elections that will call to the polls 800 million Indians. 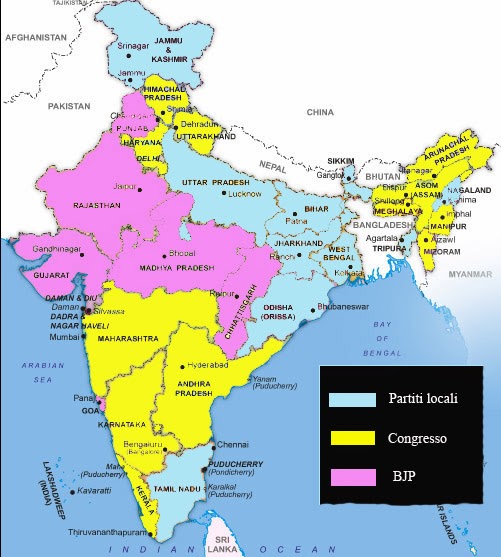 For the Congress Party (click here), which expresses the current Prime Minister Manmohan Singh, these elections will be crucial and very difficult.
The many cases of corruption have come to the fore, the economy does not pull anymore, vertical fall in the rupee against the dollar, the double-digit inflation with an intolerable reduction in purchasing power, the discontent of many segments of the population are all factors pushing hard to believe that the party of Sonia Gandhi will replicate the results of the previous national elections of 2009.
This impression is confirmed by the recent statal elections which were held in key states in the Indian federation where the Bharatiya Janata Party (BJP), the Hindu nationalist party led by his critically acclaimed and discussed (click here) leader Narendra Modi, won in a clear way.
The BJP wins in key states and populous as Rajasthan, Madhya Pradesh, Chhattisgarh.
The difficulty of the Congress Party is also evident from the delay with which the Congress chose the name of the candidate for prime minister which will be compared with Modi. Granted, although not flattering in the polls, the appointment of Rahul Gandhi, son of Rajiv and Sonia Gandhi and grandson of Indira.
Political situation is complicated by the born of a new star. It is AAP, Aam Aadmi Party (literally Common Man Party, click here), which comes from the experience of the anti-corruption movement of Anna Hazare and that is driven by Arvind Kejriwal. The AAP has won the important Delhi hall where Kejriwal, with the support of the Congress, became Chief Minister in last December to resign a few days ago when his anti-corruption bill (the Jan Lokpal Bill) was rejected by parliament in which the AAP has not the majority.
But Congress and BJP, the two major Indian parties, will not be able to govern alone and will need the support of the myriad of local and regional parties as well as the AAP whose votes will be difficult to do less.